Although most spiders aren’t dangerous, they’re certainly creepy, obnoxious, and frequent visitors of Elk Grove, California homes. If you find yourself tearing down cobwebs, killing spiders in the corner, or frequently getting startled by an arachnid indoors, you might have a serious problem. Spiders come in many different sizes and colors, but all of them are annoying to deal with, and an indicator of other pest problems. Let’s talk about the types of spiders common to Elk Grove and what California homeowners can do to prevent them. 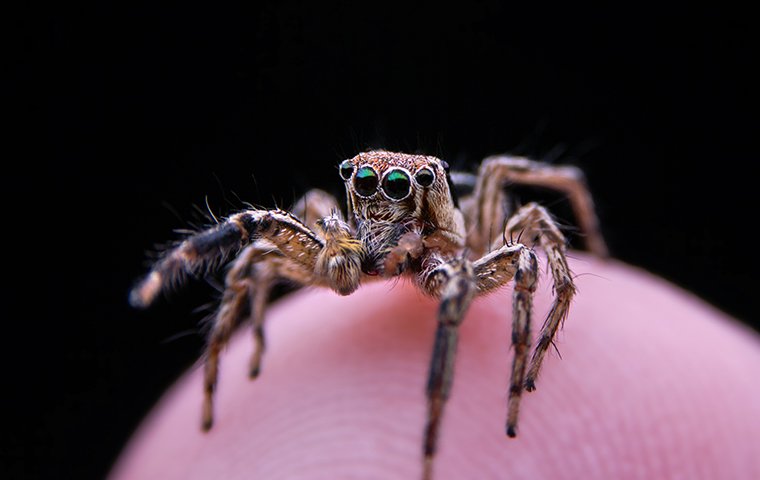 All spiders have fangs and possess venom, leading many people to believe that all spiders can be dangerous. In truth, most spiders are only dangerous to the insects they eat, and their venom will almost never hurt you or your family. Spiders come in countless shapes, sizes, and colors. Thousands of spider species have been identified, and thousands more have probably gone unnoticed. Only a few of these pests will manage to get in your home, however, and the non-threatening spiders in Elk Grove include the following:

Also known as “daddy long legs,” these arachnids have small bodies and long, spindly legs. Their webs are far less intricate than most spiders, they simply create loose-weaving webs that stack on top of each other. Despite common myths, these spiders are not venomous and can coexist without causing health problems. Grass Spiders: These brown or gray spiders are contented outside the home. They build funnel-shaped webs in tall grasses, window wells, or steps, and they have light and dark stripes close to their head. They bite when afraid, but their bites are of very low concern to humans.

These small arachnids usually have brown, black, or sometimes greenish bodies, and as their name suggests, they often jump from place to place. Some species are known to fly, but these spiders mean no harm; they’re much happier outdoors and their bites are both rare and harmless.

These large arachnids prefer the outdoors and are identifiable by their size and the bands of gold and black across their bodies. They rarely make their way indoors, and they weave large webs wherever they can. These spiders are undeniably beautiful but don’t disturb them – the mothers bite, and their bites can be irritating for a few days.

In truth, spiders don’t cause too many problems. The time to worry is if you have a bite with two holes in the center. This is a spider bite, and if you don’t know which spider has bitten you, don't hesitate to get it checked out by a medical professional.

Often, spider infestations are a symptom of another pest issue. Spiders aren’t attracted to anything your home has to offer. Your food storage is meaningless to them, they can’t eat your home, and they have no reason to nest inside. But if your house has ants, moths, mites, or any other insects, these pests will move in.

If you find yourself dealing with spiders, try to find their food source. You may need to sweep out an infestation, and if that’s the case, then calling your local exterminator will help resolve the problem. Additionally, to prevent spiders, you simply have to prevent other infestations. Keep your food and trash secured, remove standing water, and control indoor humidity. Also, be sure to seal your house by caulking windows, sealing doorways, and filling the holes in your vents, chimney, and your roof. Finally, getting rid of cobwebs in and around the house helps make your home less inviting to arachnids.

Since frequent spiders could be a sign of another pest problem, don’t hesitate to reach out to the experts. Spiders can make homeowners uneasy and they could invite other, more venomous arachnids in. The best way to stop the problem before it gets worse, contact the exterminators at Pro Active Pest Control today for their proven prevention and protection plans today!