The mud dauber wasp is an insect commonly found in urban areas, often near plentiful spider and caterpillar populations where they lay their eggs. While not as aggressive as some other types of wasps, mud daubers are a pest that can still cause painful stings and severe allergic reactions. If mud daubers have settled on your property, Pro Active Pest Control provides expert pest control in Elk Grove you can rely on to get rid of these pests safely and for good. 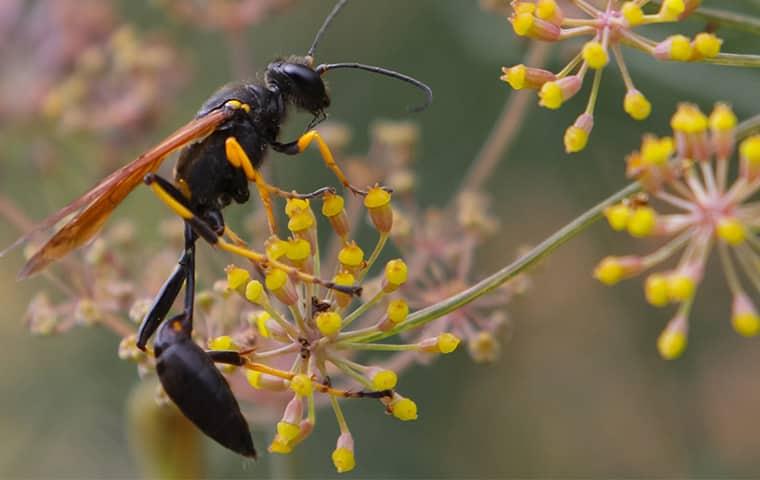 While most wasps build nests with combs, mud daubers build them shaped like urns or long pipes, depending on the species. Females start building them in the spring after they have matured from pupae to adults. Once finished, each egg gets provided with a supply of insects, generally spiders, before getting sealed in with mud.

If you suspect that mud daubers have laid eggs on your property, it is vital that you reach out to a pest control professional who can help eliminate them before they hatch into a new mud dauber population. As with many stinging insects, the best way to get rid of a wasp nest is with experts who can do it safely while also preventing new nests. Even if mud daubers are less aggressive than some of their relatives, they can still inflict painful stings when threatened that could require emergency medical care.

Mud daubers prefer to live near humans who can provide them with sweets and an abundant supply of insects and flowers. Females can share nests, lay their eggs together, and can sometimes sing in the process. While mud daubers are only one of the different types of wasps, and they are not feared as much as other more aggressive kinds like yellow jackets, they can still inflict painful stings when threatened, like during nest removal. Like many stinging insects, they can attack pets and humans alike and, unlike some types of bees, can sting more than once.

Is It True That Mud Daubers Will Eat Spiders On My Property?

Yes, mud daubers eat spiders and use paralyzed spiders to lay their eggs in. They generally require 25 live spiders per single egg, which will eventually die. While it may seem beneficial to have a population of spider-eating insects, mud daubers are not inoffensive. They can deliver several painful stings.

How To Get Rid Of Mud Daubers Safely And Effectively

While many DIY ways can somewhat help keep mud daubers away, none of them are foolproof. At the same time, this is important to remember, especially if you have children, older adults, or people allergic to wasp stings, as mud daubers will sting if they feel threatened. The most effective wasp removal methods generally require the removal of the nest, which is not something one should attempt on their own. It can lead to painful stings, and the mud daubers might return to rebuild their nest. A pest control professional can advise you on the best way to get rid of them while preventing a new infestation.

For the most effective wasp prevention tips, reach out to the professionals. Mud daubers are a pest that can establish themselves on your property, making areas of your yard hazardous due to their painful stings. If mud daubers have settled on your property, Pro Active Pest Control can help you get rid of these pests safely and effectively so you can enjoy spending time outside without the threat of being attacked by wasps.