Tarantulas in Queen Creek: Not Just At the Pet Store

Home › Blog › Tarantulas in Queen Creek: Not Just At the Pet Store

Pro Active Pest Control is a team of seasoned professionals who have effectively expelled intrusions from pests for residential and commercial customers in this community for many years. We attribute much of our success to a commitment to delivering the highest-quality customer service and standing behind our work with a pest-free guarantee. We have the skills and treatment capabilities necessary to solve problems involving rodents, cockroaches, bed bugs, and a host of other menacing pests. 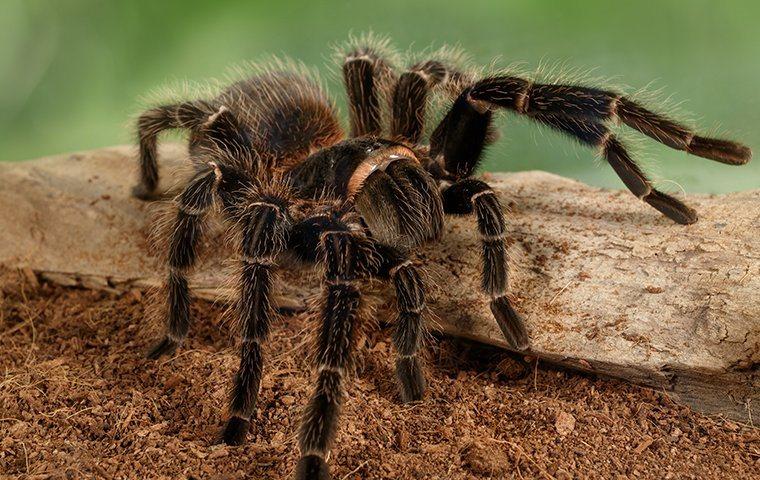 Like insects, spiders are classified as arthropods, meaning they are invertebrates with an exoskeleton; however, they are actually predatory arachnids. Spiders are characterized by having two body segments connected by a thin pedicel, eight legs, and no wings or antennae. They have a diet consisting of insects, other spiders, and various other small vertebrates.

Tarantulas are large spiders that range from two to four inches that exist in various species throughout Arizona, where they tend to be most active during the late summer and fall months. Based on how they have traditionally been depicted, Tarantulas are hairy and often feared. One of their defensive capabilities involves releasing their urticating hairs that contain venom against possible predators.

Tarantulas are burrowing creatures that reside in crevices such as holes in the ground, voids within tree trunks, or beneath rocks. They do not spin webs and are predominately nocturnal creatures that remain in their burrow during daylight and emerge at night to hunt prey, including crickets, cockroaches, and some tiny mice. Tarantulas can live a long life, typically ten years among males and sometimes more than 20 years among females.

The Dangers Of Venomous Spiders

Tarantulas have fangs, are venomous, and can deliver a painful bite to humans if provoked. Humans might develop a rash from exposure to the hairs of a tarantula, but their bites pose a minimal health risk to humans.

Two of the venomous spiders that are potentially more dangerous to humans are the black widow and brown recluse spiders. Black widows often measure ½ inch long and have a shiny black body with a distinctive red marking on their undersides. Brown recluse spiders are identifiable because they have six rather than eight legs and have a “violin-like” marking on their back.

People who a black widow bites may exhibit symptoms including chills, fear, or nausea and need medical attention. The brown recluse can deliver a painful bite that causes the skin to redden and itch. In rare cases, the bite causes necrosis, which results in blistering and disfigurement. Based on the potential health risks, people are discouraged from attempting to encounter these two species.

There are several things that you can do to help keep spiders out of your property:

Have troublesome and potentially harmful pests invaded your property? Consulting with a licensed pest controller is the best course of action for efficiently safely expelling them for humans, pets, and the local environment.

Pro Active Pest Control technicians will conduct a detailed inspection of your property, devise the best treatment plan, and diligently follow up to ensure customer satisfaction. Contact our office today to schedule a consultation.