Do you know there are many types of wasps in Queen Creek? Some of these wasp species may be like family to you. Species such as yellow jackets are well known, but other varieties like the mud dauber aren't as familiar. 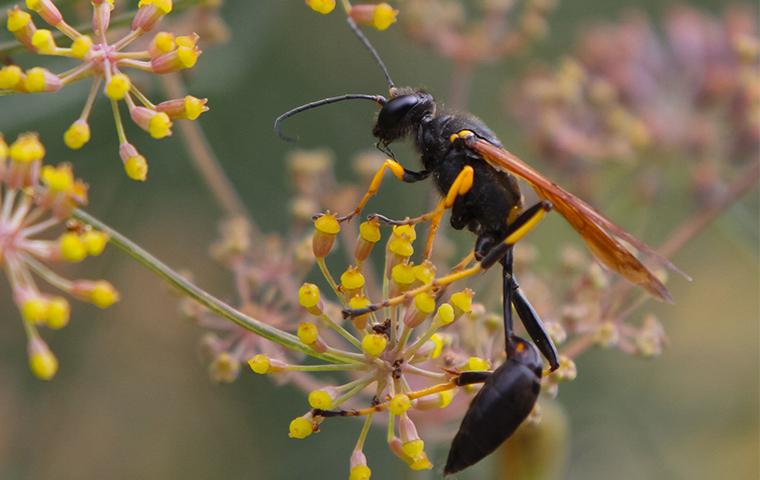 Mud daubers are a wasp species that create their nests out of mud, from where their name derives. These stinging insects can inject venom, but they tend to be less aggressive than other wasps.

Find out how to identify mud daubers and get helpful wasp control tips in this guide and how Pro Active Pest Control can help.

Most mud daubers are black, but some have yellowish markings or blue. They are long and thin with a threadlike "waist" that attaches their heads to their thoraxes. But, one of the best ways to identify mud daubers is by their nests.

The females create nests out of the mud. Each nest cell is about an inch long, and they are attached to the next one. The nests often look like a mound of dirt or old cardboard built under eaves or ceilings. Mud dauber nests are common in outbuildings and garages, too.

One of the main questions you likely have about these pests is, "are mud daubers dangerous?" The answer is usually no. Mud daubers in Queen Creek have stingers and inject venom just like other wasp species. However, they aren't aggressive. Unlike many other wasps in the area, they don't defend their nests and are solitary. So, if you see a nest, you don't have to worry about a bunch of mud daubers emerging to sting you.

Overall, mud dauber stings are rare though they can happen. The main risk with mud daubers is their venom and if you're allergic. Also, keep in mind that other more dangerous insects might take over old mud dauber nests, so it's still wise to be careful.

Is It True That Mud Daubers Will Eat Spiders On My Property?

If you've heard anything about mud daubers, it's that they can kill spiders. While this might seem like a myth, it's true. Mud daubers, just like all wasps, pollinate plants, but they also consume spider prey. They can even be beneficial as they often attack black widow spiders. The mud dauber will fill its nest with multiple spiders to feed its young.

So, on the one hand, mud daubers around your yard can be a good thing as they can eat dangerous spiders. On the other hand, their presence can indicate a spider control issue. In any case, the best way to remove difficult pests like wasps and spiders is with Queen Creek pest control from Pro Active Pest Control.

How To Get Rid Of Mud Daubers Safely And Effectively

Mud daubers aren't particularly dangerous pests, but they are still scary to come across. If you want help removing mud daubers from your yard, give our wasp control team at Pro Active Pest Control a call.

We will assess your property, identify the wasp species, and work with you to devise a treatment plan. Call us today at Pro Active Pest Control to request a quote and get started.